Getting ready for our exhibition opening was exciting. I got to do what I love: baking cakes and decorating them. On the Wednesday I baked most of the day, and I came home from work on the Thursday and decorated more. Then coming out of work on Friday I rushed to get things packed up and completed. My stress levels were high coming up to Belfast, the traffic made me late for the exhibition.

Eventually arriving at the exhibition will all the guests there, myself and Ray set my pastries onto our table. I was in complete awe with how the room was looking with everyone’s cakes and I could see how much work Anthony and the team at Belfast Exposed had achieved. It was brilliant and our photos had turned out amazing with Anthony expertise and Hannah’s work in getting them framed and installed.

I felt so proud to be part of our group that night and how much of a difference we might have made for the future LGBTQ+ communities in Northern Ireland and other parts of Ireland. I’ve made so many good friends from our group and I hope we all meet up again.

Afterwards we went to Maverick for a celebratory drink. It was good to all get together for an alcoholic beverage after 9 months of hard work! We all then partied the rest of the night well… I’ll not give away too many details, but me, Chris and Ray partied in Kremlin! Brilliant night. I hope for many more with all the gang! 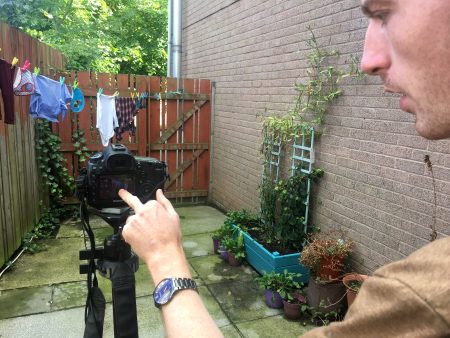 On the 9th of September I created my Collaborative Self-Portrait with Anthony. We took photos of me hanging baby clothes out on my washing line to make it look like I am a gay father in the 21st century doing the kind of normal activity a mother or father would carry out in their daily lives.

Family is so important to me. I am a family orientated person and I dream of having one of my own one day. But being a gay man, I’m not too sure if that will happen. Meeting someone, having the chance to get married, and for us to have our own children would be a dream come true. I would ideally love to have my own child through surrogacy but that can come at a costly price and I will never rule out the option of adoption. Giving a baby or child a life they deserve would be brilliant for me and especially for them.

I hope so much will change in the future with equal rights for LGBTQ+ people. Why are there restrictions, bans and no equality? No-one can stop who they fall in love with, regardless of gender, race, nationality or religion. This is why society should move on and accept that there should be marriage equality, and gay parents, in Northern Ireland. In five years time I’ll be turning 31 and by then I hope to be in long-term relationship, thinking about marriage, and having babies. Will this happen? I’m not sure. But as people say, all things happen for a reason!

The night before Pride I was working until 3am. Being so busy with work, and with a lot of other things happening through the week, I didn’t get the chance to feel the excitement I felt the previous year before my first Pride

Getting up for 9am to get the train for our 10am meeting time at the centre was hard.  Eventually I made it by about 10.20am. Seeing the selection for breakfast after such a rushed morning, I wasn’t sure if it was a bacon roll or a sausage roll that I wanted, so I opted for cereal instead. And then after sitting down to talk to one of the other volunteers, I was greeted by Nuala and Michael. Not knowing what my job in the parade was going to be, they asked if I wanted to be a balloon man. Not knowing what this was, I was hesitant at first, but then I  said, ‘Why not?’ I knew all would soon be revealed. I was to have to have Pride coloured balloons attached to my back! 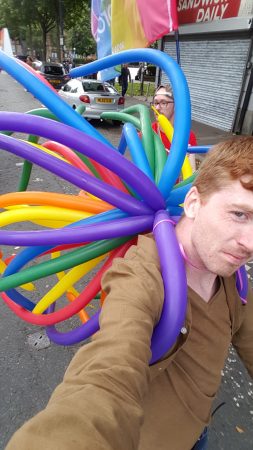 Talking to the other men while walking to the starting point was exciting. Their comments were funny and they made me feel part of the group. With a few hick ups we got there in the end. Closer to gay parade time and enjoying our day! 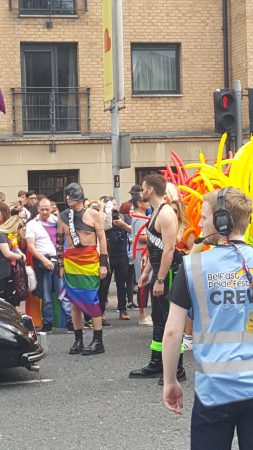 Waiting at the starting point of the parade was quite intense. Lots of people panicking, but lots of people, including me, just taking it all in, loving the amount of people out and all the work people had put in for this day. 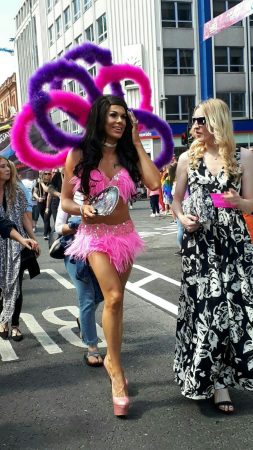 With the parade starting and getting into full swing, this was our time to shine. Seeing all of the people out on this fabulous sunny day in August to support their friends, families, and whoever else, was overwhelming, and I’ve heard it was the biggest crowd Belfast city has had in the history of Pride. From where I was there was no hate or abuse There was nothing but CHEERING and people shouting with pride and happiness.

I was most excited about seeing my family who had come to see me in the parade. Getting to the part of the route where I knew they would be, I looked around for my sister and my brother and his girlfriend. I was thinking, ‘Where are they?’, and then I heard my name being called and I saw them all. This was the icing on the cake! I always knew that my family accepted me being gay but this really made my day. I have to say, my family are the reason I am who I am today. Their support has brought me to where I am in life. They are my inspiration – even though I inspire a lot of people too… LOL!!!

The youth of today bring the future forward. To see how different society is now, it’s brilliant to know there will be change!

We have four more months of the year left, can’t we put our differences aside and vote equality in marriage and a lot more for Northern Ireland? C’MON GUYS. No more marches. Make it happen and soon! 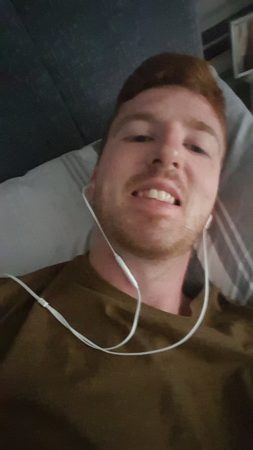 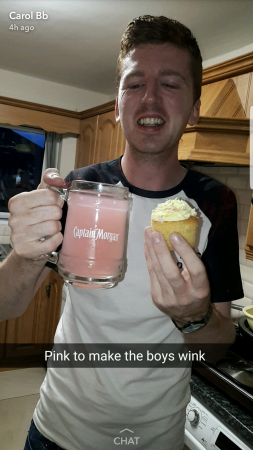 Being part of a large family and growing up in a small town, I now look back and realise what a loving and supportive childhood we all had. I love where I grew up.  Our neighbours and friends were always close, and everyone helped each other out no matter what.

Coming into my teenage years I knew there was something different about me from my male friends and family members. Not knowing for sure exactly what that was at the age of 13, I can say now ten years after realising I was gay and keeping it to myself for so long, I don’t know why I was so scared to tell my family.

I will always remember the date I came out to my family: 4/9/15. This day was a big turning point in my life. Telling my family was the hardest thing I have achieved in all my 23 years.

Two years later, I now volunteer for The Rainbow Project in Belfast and I live here with my best friend too. I have met so many inspirational people through the project, and I’ve learnt a lot through their training programmes and by  volunteering. I have to say, I meet so many funny people on the nights when we volunteer. I get messages from lads, saying, ‘you gave me condoms last night’. I always feel like replying, ‘Durex loves safesex!’ ?

I’ve found that no matter what hurdles you face in life you should always look to the positive side of things and aim high for what you want. You make your life what you want it to be, no-one else does this for you. Yes, we meet old and new friends along the way, but I believe you should always enjoy what you have, as everything happens for a reason.

The moral of this story is seek and you shall find. Be positive in everything you do and with everyone you meet. Being happy and proud in life always helps you succeed.

I’ve found making your own decisions in life gets you to where you want to be. Being gay is not shameful, nor should you be embarrassed about it.

Gay is the new way… LOL! 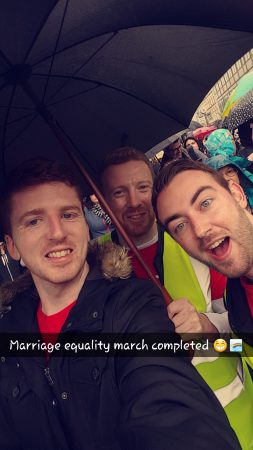 I think the name ‘Let Us Eat Cake’ might make people think we are targeting people that may be against gay views. This shouldn’t be the case though, everyone has their own points of view on this subject.

I also think, with gay men, there should be no doubt that they should be allowed to either adopt children or even have a surrogate in the future. No matter who the couple are. Gay / Bi-sexual / Lesbian / Trans… They shouldn’t be discriminated against when in a same sex relationship and want to have children together.

Being very family-oriented and a family man, I would love someday to meet the man who will love me and also one day want to settle and have children with myself.

All people in today’s society and communities should be equal in every way.

If all people were born gay, would it be such a big thing if people had to come out as ‘straight’? Why should be frowned upon if / when people come out as LGBTQ+? 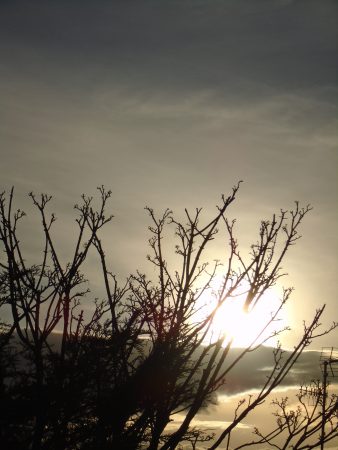 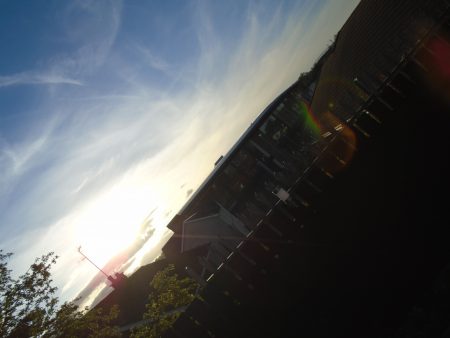 Getting to hear everyone’s views is good, to know we’re all not alone. There are so many of us who believe in the same rights for LGBTQ+ people.