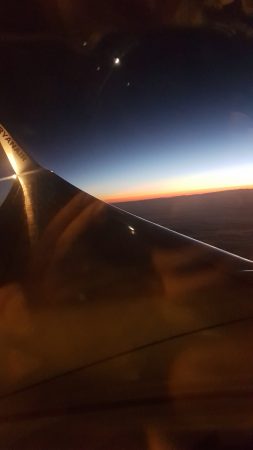 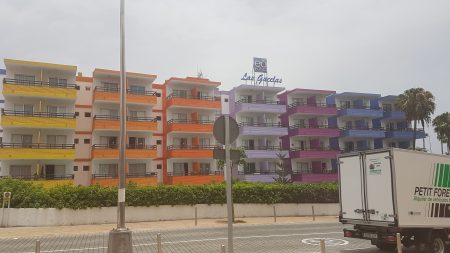 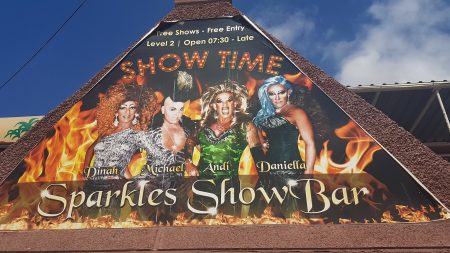 Choosing where to go on holiday is hard enough, with costs, accommodation and airlines, but it’s even harder when you have to consider if the host country will accept, or at best, ‘tolerate’ who you are. (I hate the word tolerate. It’s awful to think that someone needs to consciously hold back and behave differently due to their own prejudices, and then feel all proud of themselves for being modern liberal people. Anyways… I digress.)

After searching with Ray, we eventually found a place in Gran Canaria and off we set for ten days in the sun. They have a Gay Tourist Map, which is always a welcome sign. On our first day we headed into a well-known gay area for a cold pint and to explore. As soon as we stepped into the area we could see the beautiful colours of rainbow flag streamers above a bar and I got an immediate feeling of ease. Murals and signage, for drag shows and gay clubs, were all around too. ‘This is fantastic!’, I thought. I felt safe and comfortable like being in the house at home.

It’s weird how powerful a flag can be, how those colors immediately make me feel I can relax and enjoy company with similar people. I’m really glad Raymond is going to be using the theme of flags, demarcation and identity for his staged photo for Let Us Eat Cake because it is so relevant. It’s interesting to think about whether this has more significance for people from NI, where flags and symbolic expressions of identity have such deep-rooted importance for people from all backgrounds in the community.

The streets and bars in the evening where full of same sex couples. They could openly hold hands, kiss, be affectionate and no one batted an eyelid… except me. Gay public displays of affection always immediately attract my attention, probably because it doesn’t happen much in NI through the fear of abuse or being accused of flaunting themselves in public.

It’s just so lovely to see people in love. People who may be at the beginning what could be a lifetime of devotion and adventure. People who may have had to travel across the world to be themselves and to be open.

There were plenty of straight people there too. Everyone loves a cheap cocktail with an umbrella, sparklers and a questionable amount of spirits! There was such a positive and ‘normal’ atmosphere with people going about their everyday business. Wish it was like this at home.

Everyone of them with their own histories and backgrounds. I like to dream and imagine the LGBTQ+ people have loving and accepting families and have had an easy life away from discrimination, but then in reality I’d guess quite a lot of them have had some form of negatively past experiences due their sexuality. Each with their own unique stories.

Wouldn’t it be amazing to think that in future we could travel the whole world and be open all the time? Wouldn’t it be lovely if we didn’t need Gay Maps to find out where it’s ‘okay to be gay’? Where we could show our commitment to our partners, or seek new love and meet people if we are single, without having to target a country where we know people of our ‘type’ would likely be. I’d love to think someday even I wouldn’t notice I’m surrounded by LGBTQ+ people. I would love to not have to be self-conscious and aware when I hold my partner’s hand at home, for us to be romantic and celebrate as a couple, to not look like two male friends until we feel we’re able to ‘announce’ we’re together.

We walked home in the evening holding hands and it was lovely. One of the best parts of the holiday, in fact. It’s something so simple, but we wouldn’t do this at home… unless we’ve had some Dutch-courage!