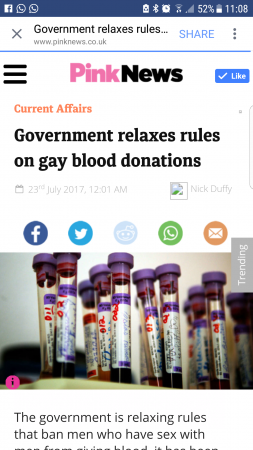 It’s great to see changes in gay blood donation in the UK announced by the government. However, as always NI is behind the times, this only applies to a relaxing of rules in England and Scotland. Yet another, ‘devolved matter’, that will more than likely take years to bring in in NI due to the mess of the political situation here.

After the positive steps taken in NI in June 2016 with the life-time ban been lifted on gay men donating blood  supported by overwhelming evidence, it just seems like one step forward… but a much smaller step than we should be taking. It’s annoying that this will probably be because of politicians who, ironically, strive to keep our union together and strong. I hope I’m wrong, but with direct rule looming and a stale-mate between the two big parties I’ll be surprised if anything gets resolved anytime soon. Another LGBTQ+ matter which will disappear into their in-trays to be forgotten about again.